#24 On Avoiding Career Traps and Burnout with Mel Kettle

This is episode #24 of Graduate Theory. Burnout is something we hear about but probably haven't had much experience with. Today's guest shines a light on what she wishes she knew before burning out in her career.

These takeaways, direct to your inbox, every week 👇

Mel Kettle is a communications expert with more than two decades of experience in strategic communication and leadership.

She has been recognised in the leadersHum 2022 Power List of the Top 200 Biggest Voices in Leadership and also has her own podcast titled ‘This Connected Life’.

The Feather, The Brick and the Truck

Mel told this great story she had read recently.

For Mel, the feather was that she was drinking lots of alcohol and her takeaway was on speed dial.

The brick was when she went to the doctor and they told her that if she didn't change her behaviour, she would have a stroke.

The truck would have been having a stroke, but fortunately, she didn't get that far.

But I really believe that there's signs that come to us when things need to be different. And you need to listen and pay attention. And I really wished that I had done that sooner.

If you can't sleep because of a problem in your life, that could be something worth thinking about.

Mel has a great rule of thumb for these serious problems. If it keeps her up for 3 nights in a row, it's time to take action on that thing.

Your job not great and keeping you awake at night? If it's three nights in a row, it's time to quit.

if it was more than if it was three or more nights in a row, then that's a really big warning sign for me that something's not right in my life. And, and I still have that. Um, And R I've I've used that three night rule with, with boyfriends, with jobs, with clients. And I just think it's such, it's your body's way of saying to you  things aren't right and you need to listen.

How to Make Important Decisions

Mel spoke about how she wished she had done better at making important decisions early in her life.

Her recommendation for big decisions was to sit down and write down the pros and cons of each choice. Making sure that you've considered both the short and long term effects of your decision.

Today's guest is a leader in his field. He has grown the engineering team at Canva from a startup to one of the best engineering workplaces in Australia.… 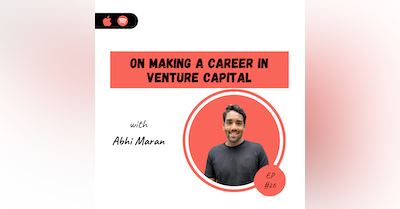 #26 On Making a Career in Venture Capital with Abhi Maran

Good morning Graduates! Welcome to episode #26 of Graduate Theory. Venture Capital is an interesting place to work, one that you don't usually expect yo…